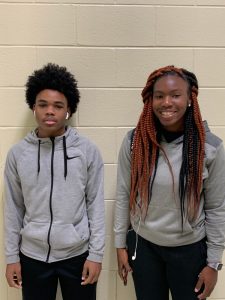 This week’s Rampant athletes of the week Are Alkevion Waller and Kamya Brown.

Alkevion Waller, a sophomore point guard, has been a big reason for the turn around for the Rampant basketball team this year. He’s averaging 16 points a game and helped Rose secure three conference wins this past week. Against Conley last Monday, he had 8 points, 4 rebounds and 3 assists. Later in the week against C.B. Aycock he scored 20 and Friday vs. Eastern Wayne he had a season high 22. Along with scoring, Alkevion had 10 total rebounds and 14 assists on the week.

Kamya Brown, a senior forward, has been an staple for the Lady Rampants for four years. This past week, she helped lead Rose to a 2-1 record with key wins over C.B. Aycock and Eastern Wayne helping Rose get to 3-1 in conference play. She recorded three double doubles with 13 points and 12 rebounds against Conley, 11 and 11 against C.B. Aycock and 16 points with 12 rebounds in an overtime win over Eastern Wayne.